Rescheduled: Reception for Sounds of Tohi: Cherokee Health and Well-Being in Southern Appalachia 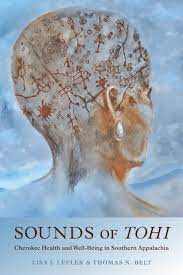 Join us at City Lights Bookstore on Friday, October 7th at 5:30 p.m. We will host a reception for the contributors of Sounds of Tohi: Cherokee Health and Well-Being in Southern Appalachia. Authors Lisa Lefler and Tom Belt will be joined by Tom Hatley (Afterword) to celebrate the release.

Sounds of Tohi : Cherokee Health and Well-Being in Southern Appalachia is the result of almost two decades of work by medical anthropologist Lisa J. Lefler and Cherokee elder and traditionalist Thomas N. Belt. The narrative consists of a dialogue between them that displays traditional Indigenous knowledge as well as the importance of place for two people from cultures and histories that intersect in the mountains of Southern Appalachia. Together, Lefler and Belt decolonize thinking about health, well-being, and environmental issues through the language and experiences of people whose identity is inextricably linked to the mountains and landscape of western North Carolina.

Lefler and Belt discuss several critical cultural concepts that explain the science of relationships with this world, with the spirit world, and with people. They explore tohi, the Cherokee concept of health, which offers a more pervasive understanding of relationships in life as balanced and moving forward in a good way. They converse about the importance of matrilineality, particularly in light of community healing, the epistemologies of Cherokee cosmography, and decolonizing counseling approaches.

The discussions here offer a different way of approaching the issues that face Americans in this difficult time of division. Lefler and Belt share their urgency to take action against the wholesale exploitation of public lands and the shared environment, to work to perpetuate tribal languages, preserve the science that can make a difference in how people treat one another, and create more forums that are inclusive of Native and marginalized voices and that promote respect and appreciation of one another and the protection of sacred places. Throughout, they rely on the preservation of traditional knowledge, or Native science, via Native language to provide insight as to why people should recognize a connection to the land.

Lisa J. Lefler is the director of the Culturally-Based Native Health Program at Western Carolina University and also the founder and former executive director of the Center for Native Health. She is editor of Anthropology: Weaving Our Discipline with Community, Under the Rattlesnake: Cherokee Health and Resiliency, and Southern Foodways and Culture: Local Considerations and Beyond and coeditor of Southern Indians and Anthropologists: Culture, Politics, and Identity.